This post has been published by me as a part of the Blog-a-Ton 30; the thirtieth edition of the online marathon of Bloggers; where we decide and we write. To be part of the next edition, visit and start following Blog-a-Ton.

There he was.... standing at the beach looking towards the sea with keen eyes. That ebony body was well suited for boxing. Boxing came to him naturally. They all loved him at the Boxing Club.

But nowadays there was a sudden change in him, he was turned into a soul less person for quite some time. He would be seen around but he always seemed to be lost in his own thoughts. His presence was like a rootless tree.

He was a prospective Olympian for the club but he would not be seen at the club for long. They kept wondering what might have happened but nobody would know. A couple of months back the team had been to Liverpool for the Boxing tournament but he never fought a bout, for he returned home without telling anyone.

While in Liverpool the team happened to visit the International Slavery museum of Liverpool. The city once infamous for being the capital of Slavery trading.

He had never heard about slavery before and the experience came to hit him like a lightening shock.

He was taken aback by what he saw. He was pained by the images. The "Middle Passage" numbed him.

Thousands stuffed in cargos of ships as if they were cotton or coal. The men would be shackled together with iron chains during the treacherous journey of 5-6 weeks on the sea. The women would be beaten and physically forced to have sexual relations with the crew members. The sick would be fed to the sharks. So much so that the sharks would follow the slave cargo in anticipation. For they were just the slaves to them, a commodity that would bring them prosperity. They would buy them or kidnap. Nobody would be spared, be it women, children or even the olds. Every able bodied person they could lay their hands on would be forcibly brought on the cargo. They would be branded like other commodities with name of the brand written on the shoulder. Children deprived from their mothers, mothers taken away from their children, fathers forced away from families. They uprooted generations for centuries in the organized trade.

The archives of the advertisements hit him like a bullet. It would roam in his mind like hundred pins.

Available for sale, Just brought from Africa, 41 healthy men of The Cunard brand, 9 boys (they would surely turn into obedient slaves), 13 women. The auction would be held at the town hall.

When he could find some composure he took the first flight he got & headed for home.

He could never bring himself to fight a boxing bout after that. For the first time in life he looked at his skin with a keen interest. Deep within himself he knew what ailed him.

There he was standing at the beach looking towards the sea with keen eyes. The sea was the route to his roots. years ago millions were forced to take the route & made rootless. But here he was now, taking the same route to find his roots.

Notes : *Middle Passage : The "Middle Passage" was the journey of slave trading ships from the west coast of Africa, where the slaves were obtained, across the Atlantic, where they were sold or, in some cases, traded for goods. It was the longest, hardest, most dangerous, and also most horrific part of the journey of the slave ships.

The fellow Blog-a-Tonics who took part in this Blog-a-Ton and links to their respective posts can be checked here. To be part of the next edition, visit and start following Blog-a-Ton. I’m thankful to Nikhil(The silent words), who introduced Blog-a-Ton to me, and I debuted in 12th edition. 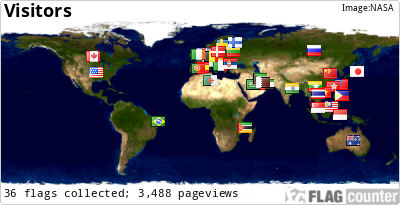